The University planned to revitalize the Robert Street Field property, also known as the Aura Lee Playing Field. The total site area is approximately 8,135 square metres (87,564 sqft). Prior to 1975, the Robert Street Field property was occupied by residential properties which faced Robert Street and Sussex Avenue. Some small factory buildings were also located along the eastern side of the property, facing Sussex Mews Lane. Originally, prior to this new construction, the property consisted of a large Playing Field on the north end of the property. The south end of the property was dedicated to hard asphalt tennis courts, a change room building (known as the W.B. MacMurray Field House Building) and an existing outdoor ice rink.

The proposed development divided the property into three separate areas; consisting of a new Playing Field, Community Area and Sussex Mews Lands. The Community Area was designed with both hard and soft landscaping elements and is intended for use by the surrounding community. The Sussex Mews Lands was graded and serves as a staging area for construction trailers for the University of Toronto’s Spadina Sussex Student Residence development. The Playing Field was designed with new sod, new decorative fencing, and perimeter lighting.  Sub surface drainage and sub surface irrigation systems were installed within the Playing Field and Community Area portions of the site. In addition, within the Playing Field area, a new geoexchange system was constructed to support the new Spadina Sussex Student Residence development. This new residential development will be built on the lots located immediately east of Sussex Mews and is not part of project’s scope. The design of the geo-exchange system under the Playing Field consists of three main components: boreholes, header circuits and main supply and return piping which is to be direct buried.

The design included 153 boreholes that were constructed under the Playing Field portion of the property. These boreholes were installed at an average 260m deep and connected to one another in rows by header circuits. In order to avoid seasonable temperature variations, the header circuits were buried a minimum of 1.5m below grade. Header circuits consist of two piping systems; one supply line and one return line located at either side of the borehole. The header circuits connect into a direct buried trench which has supply and return piping, which is also located at a minimum depth of 1.5m below grade. The supply and return piping trench run north to south along the eastern edge of the Playing Field, stopping approximately a quarter of the way through the adjoining Sussex Mews Lands. At this point the trench and associated services were be capped, for a future connection to be made with the Spadina Sussex Student Residence project.

The Community Play Area has been beautifully landscaped inclusive of features such as sand-blasted leaf patterns in the meandering concrete walkways with curved benches to flow together with butterfly gardens, playground equipment, rubberized play surfacing, limestone boulder retaining walls, movable seating under the metal fabrications simulating trees creating the shade structures, provided for the enjoyment of the local community. 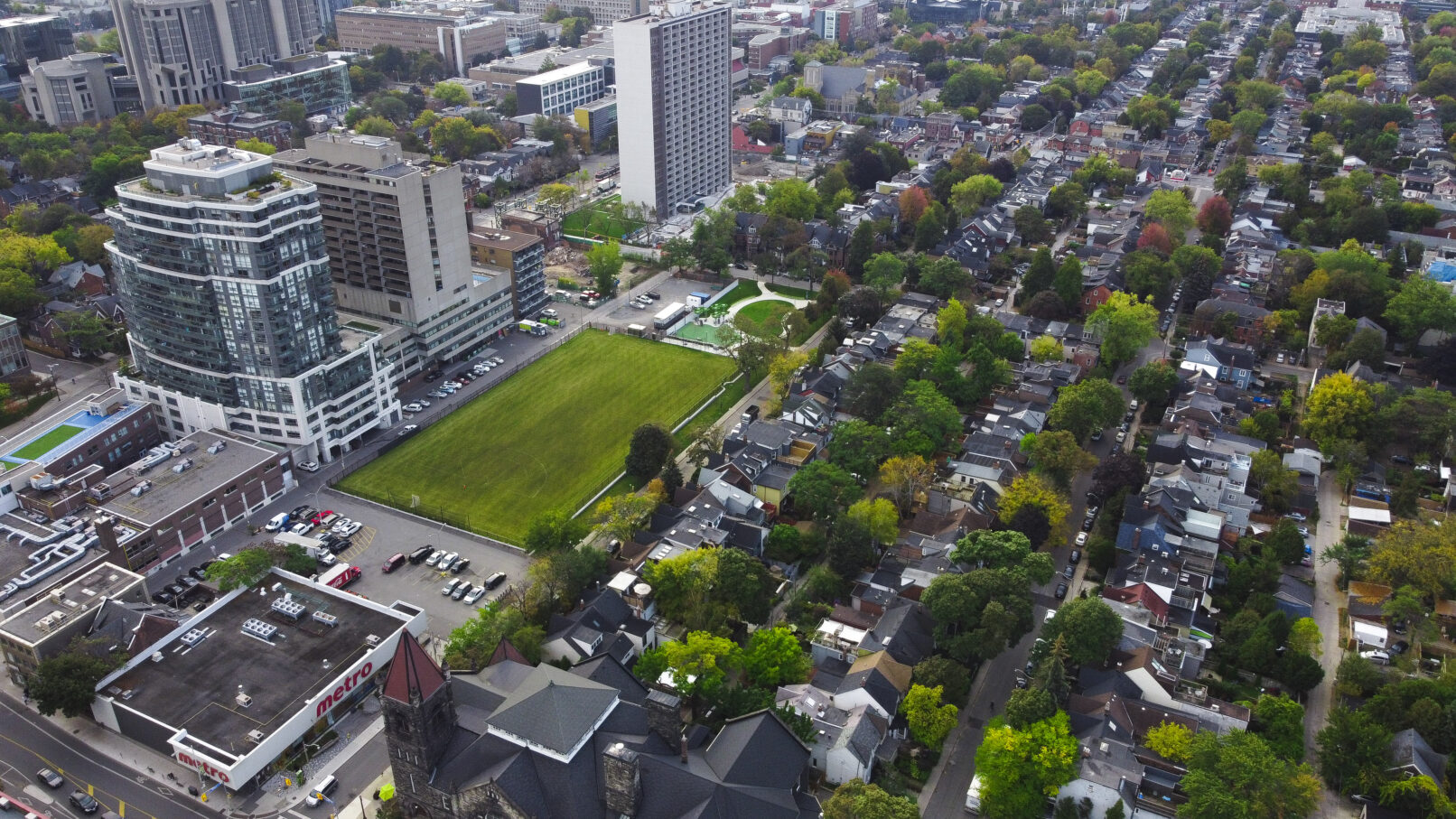 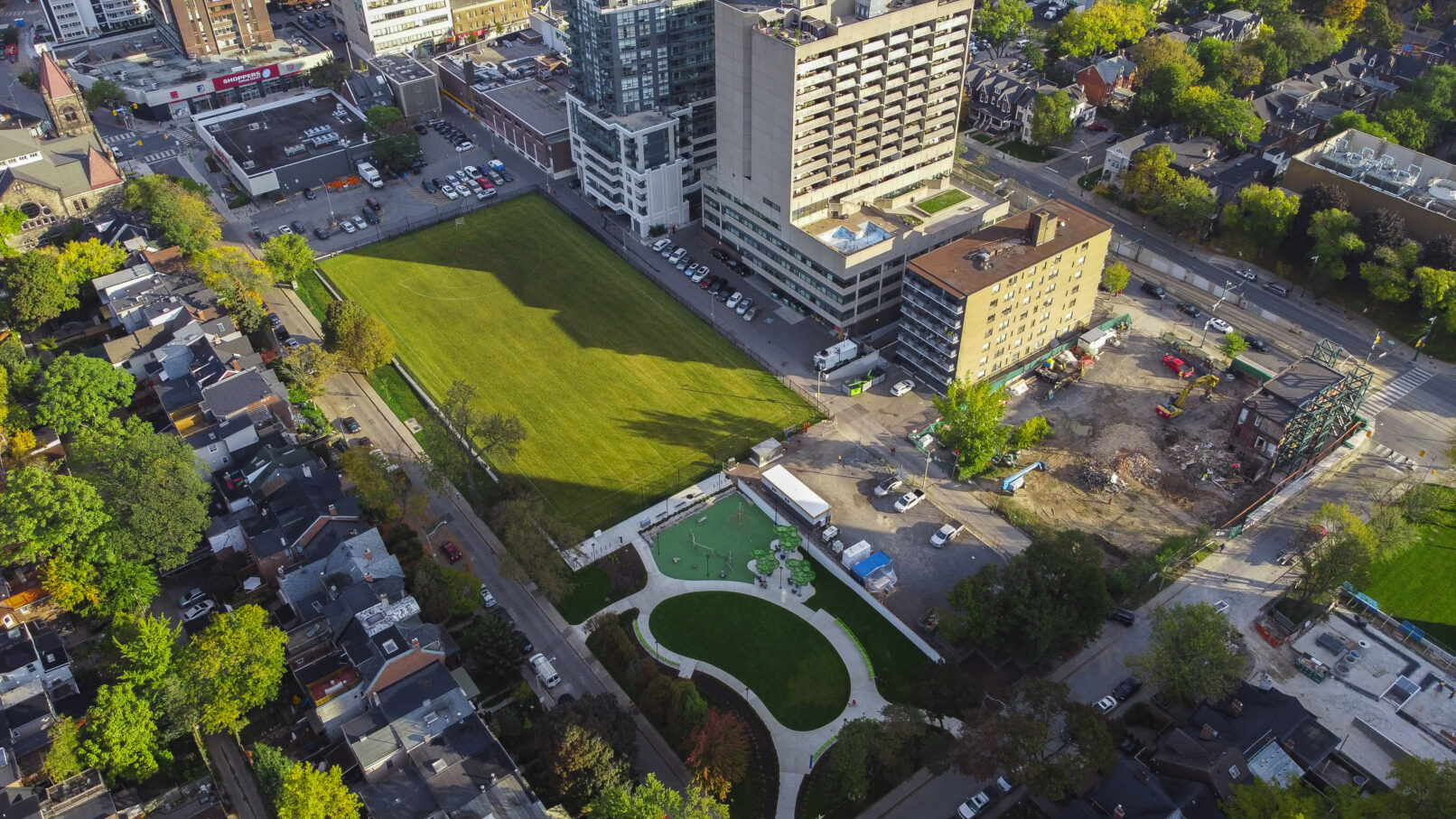 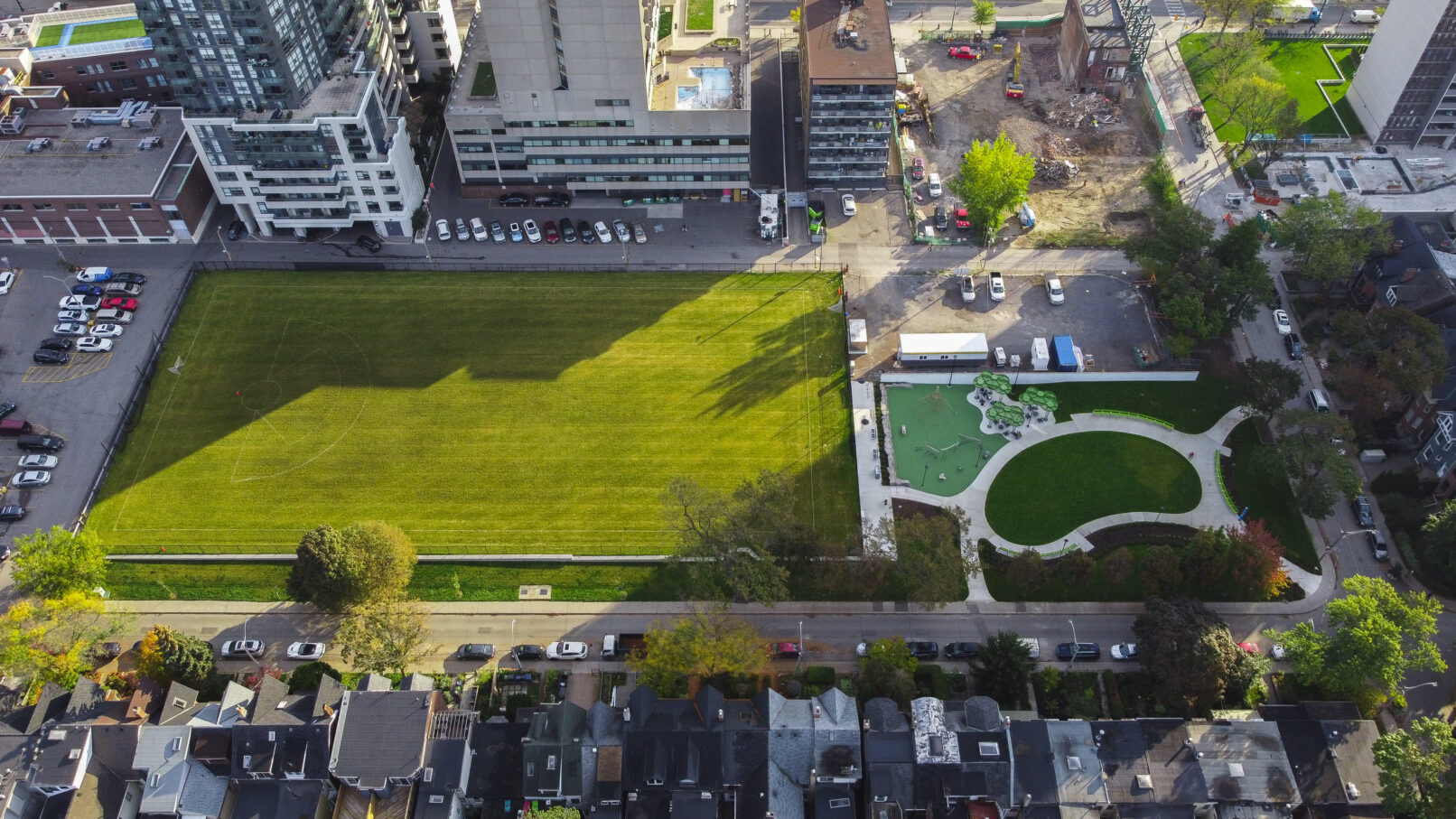 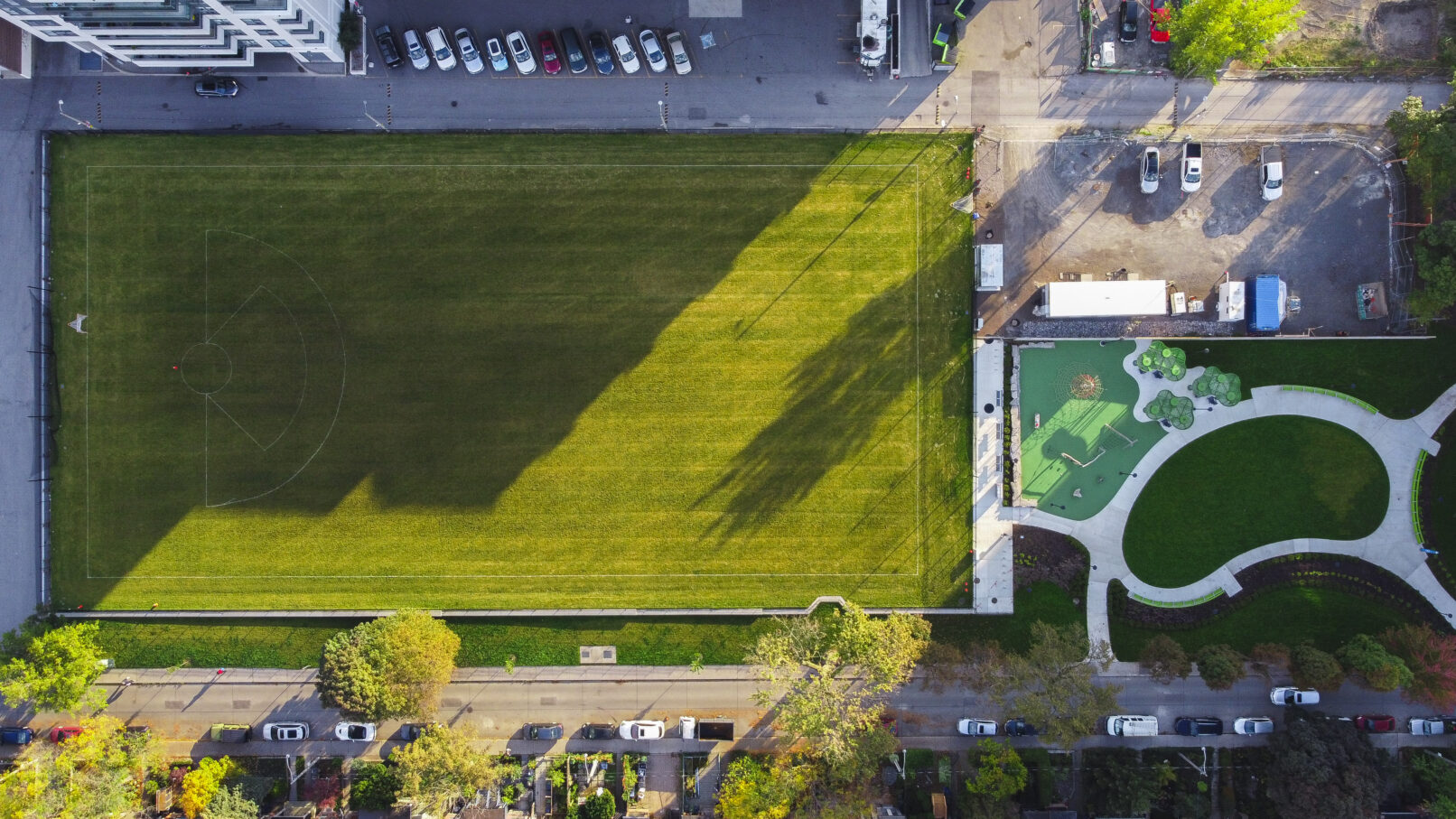 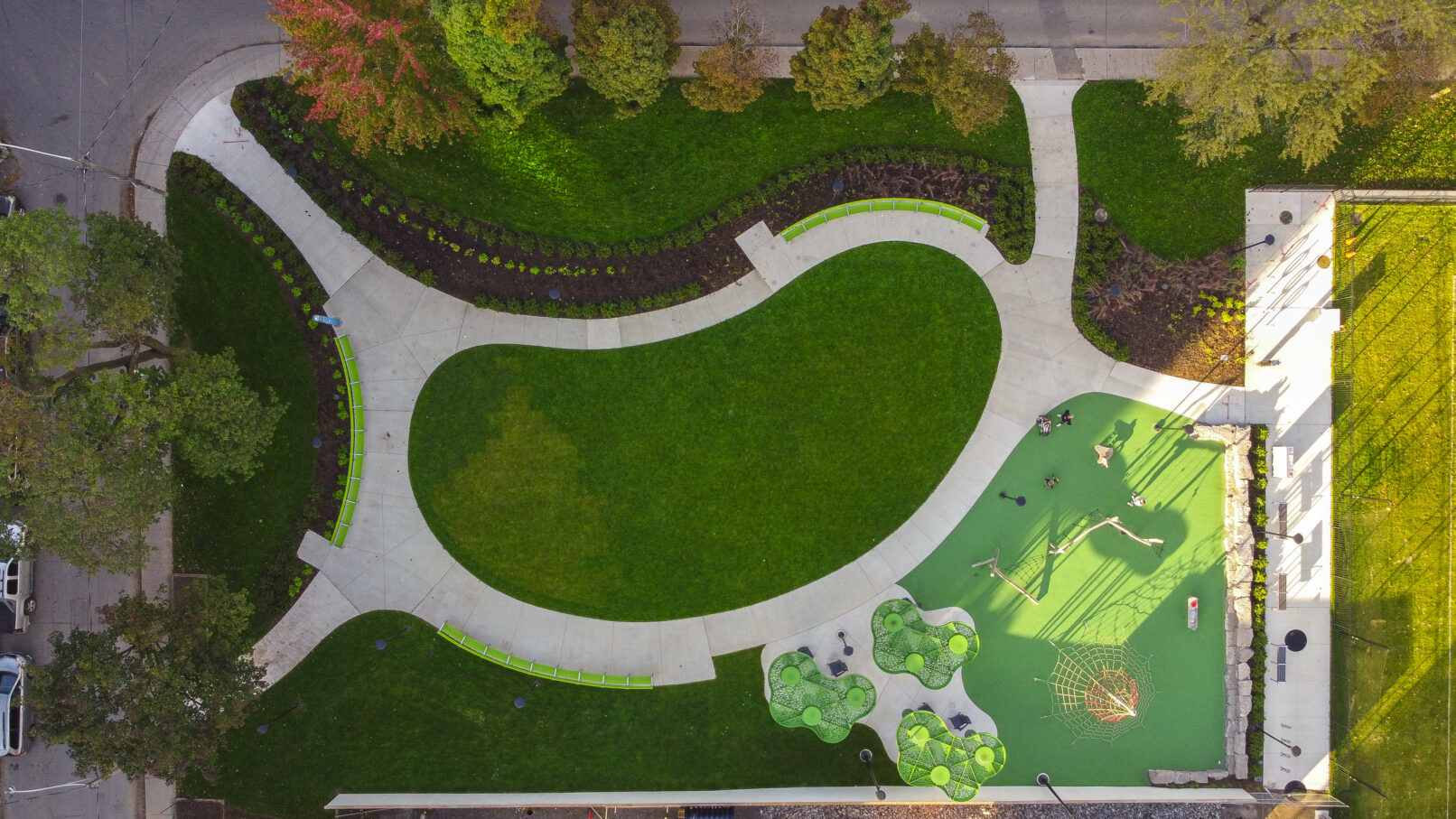 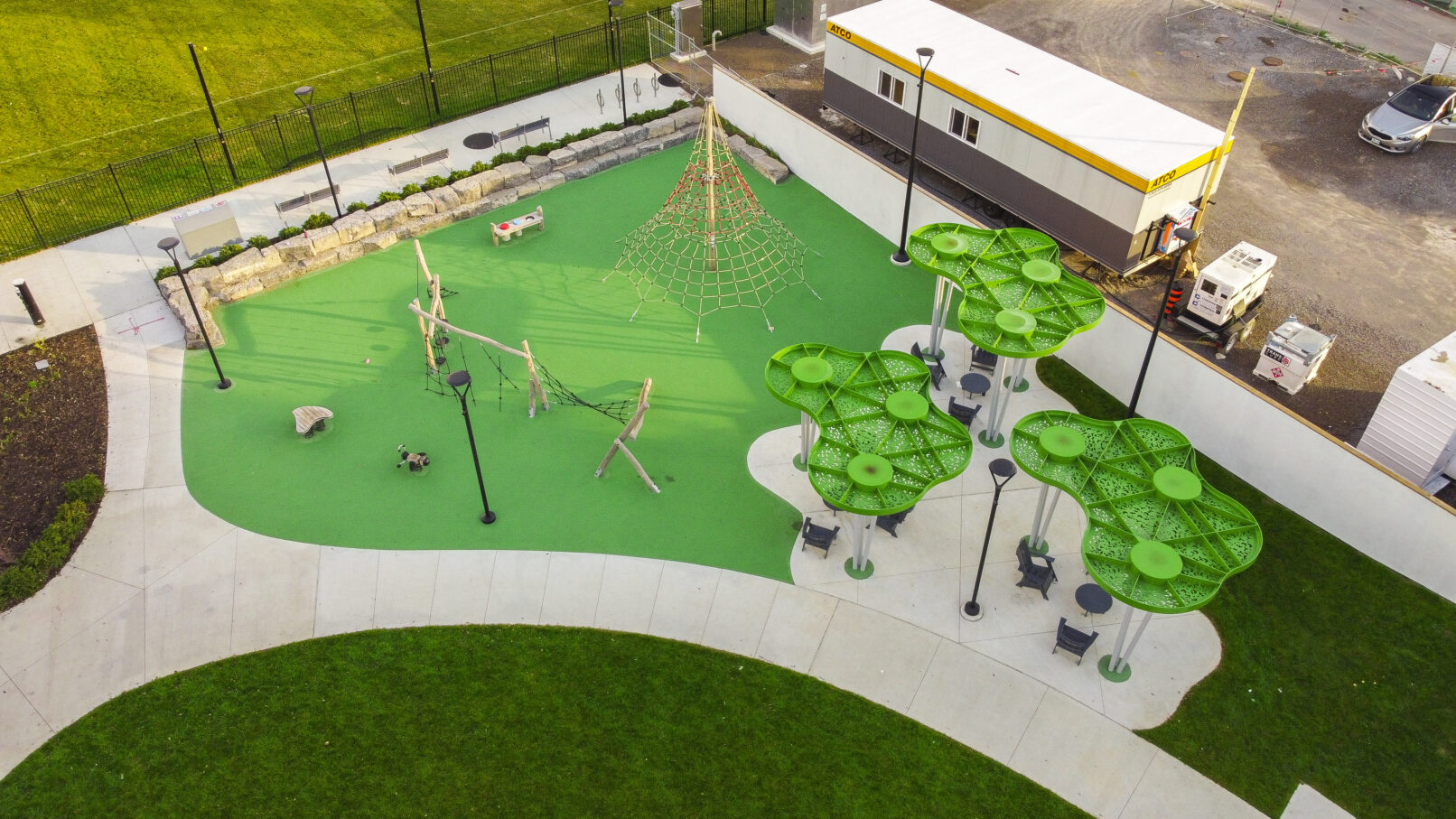 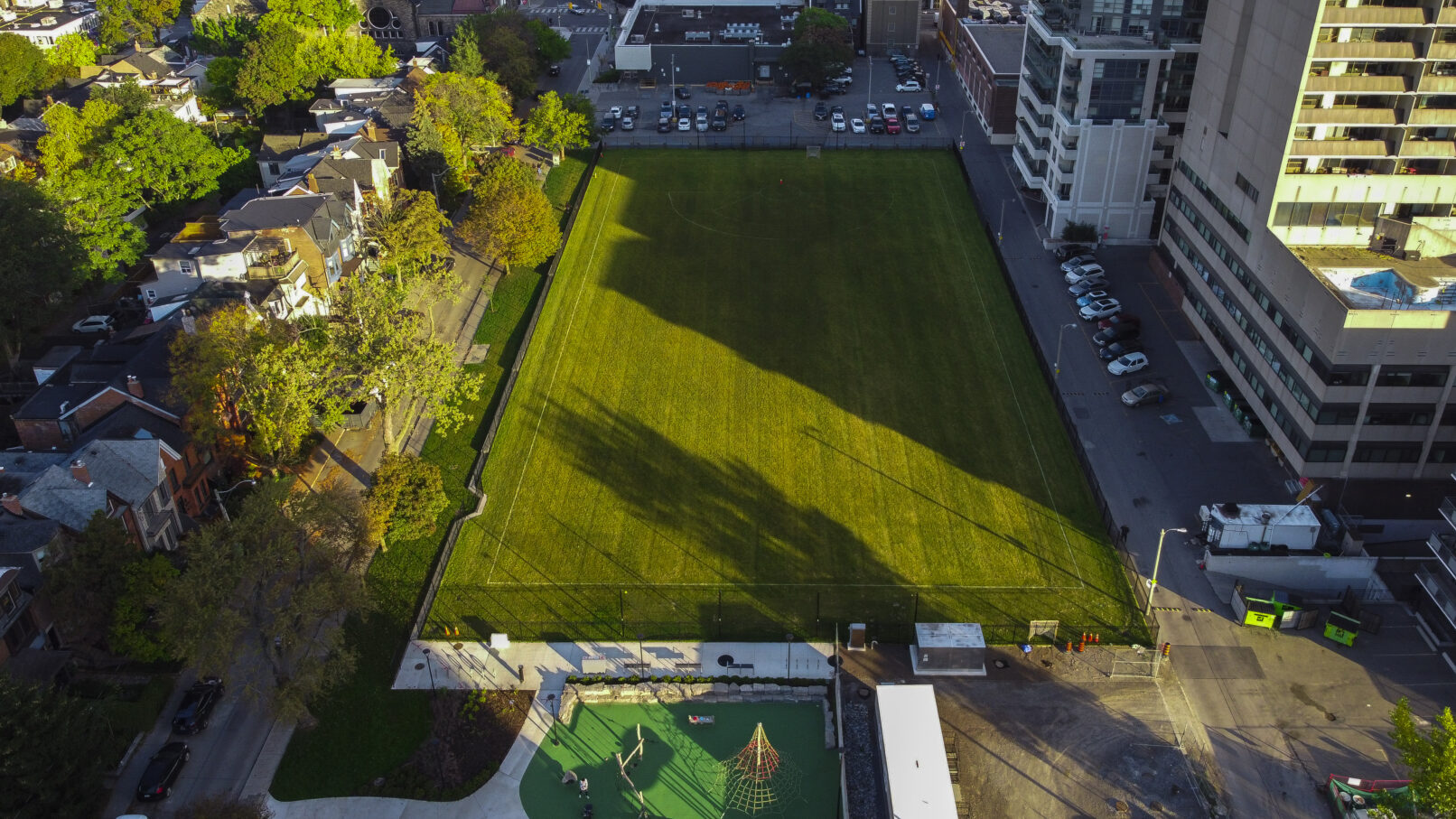 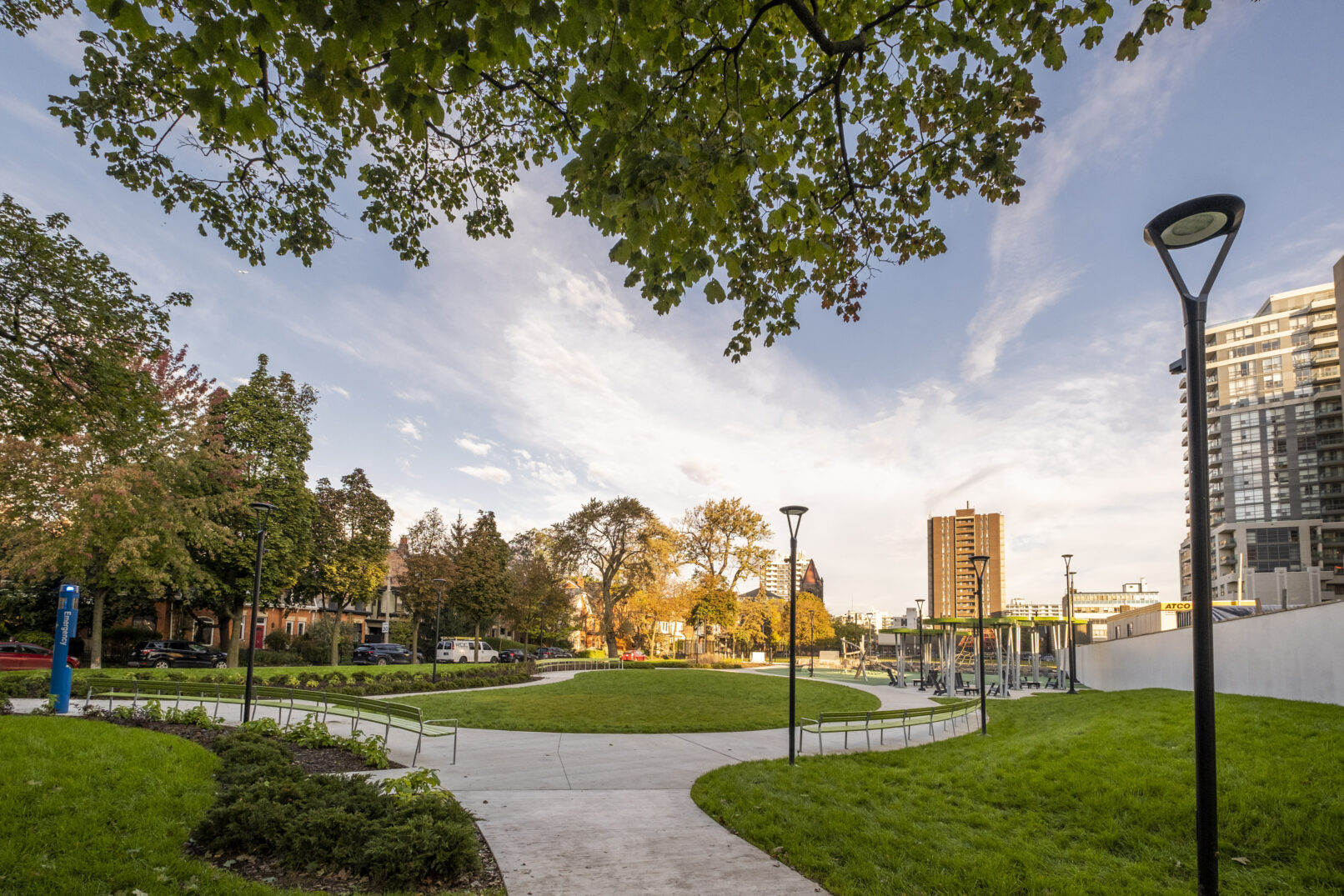 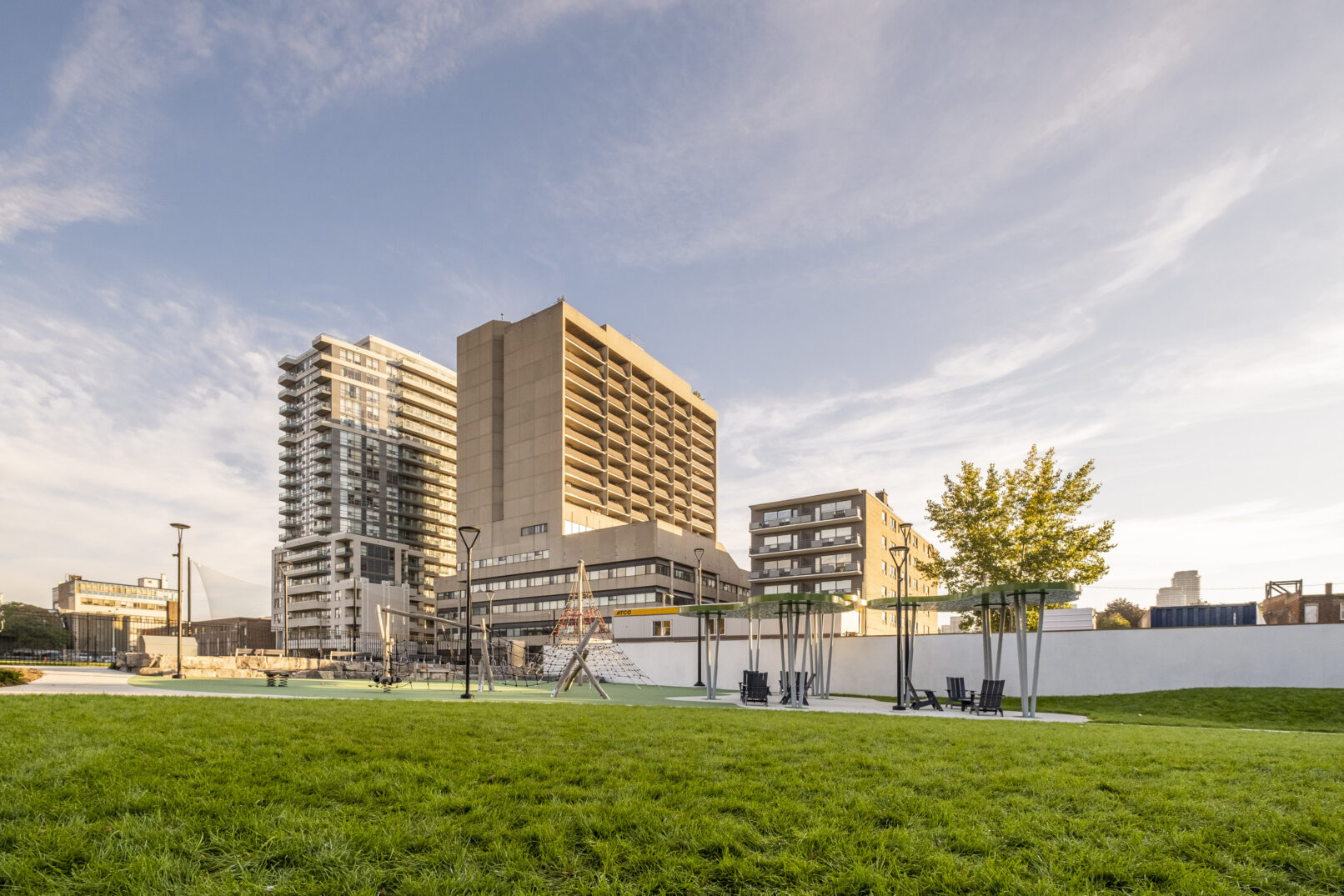 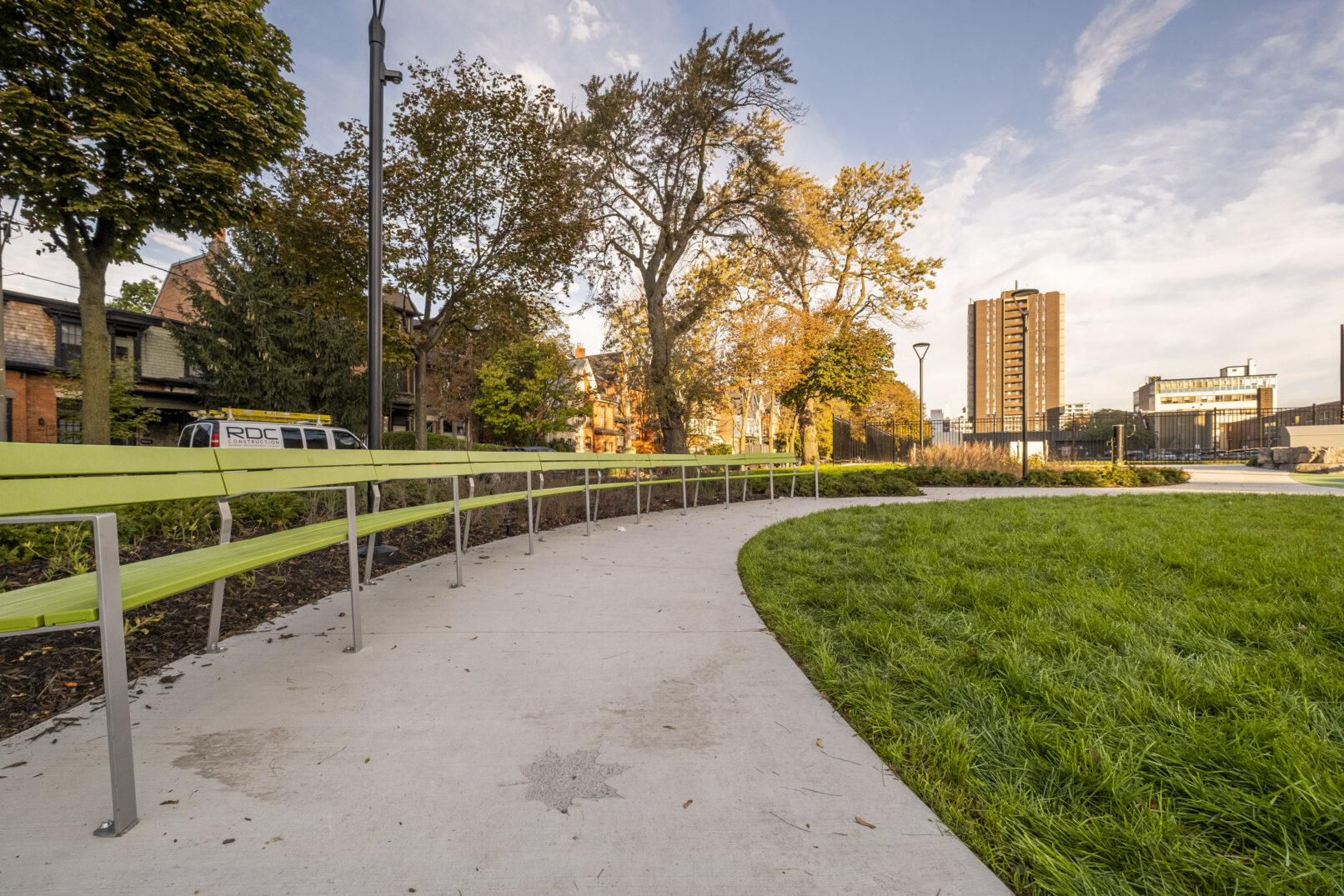 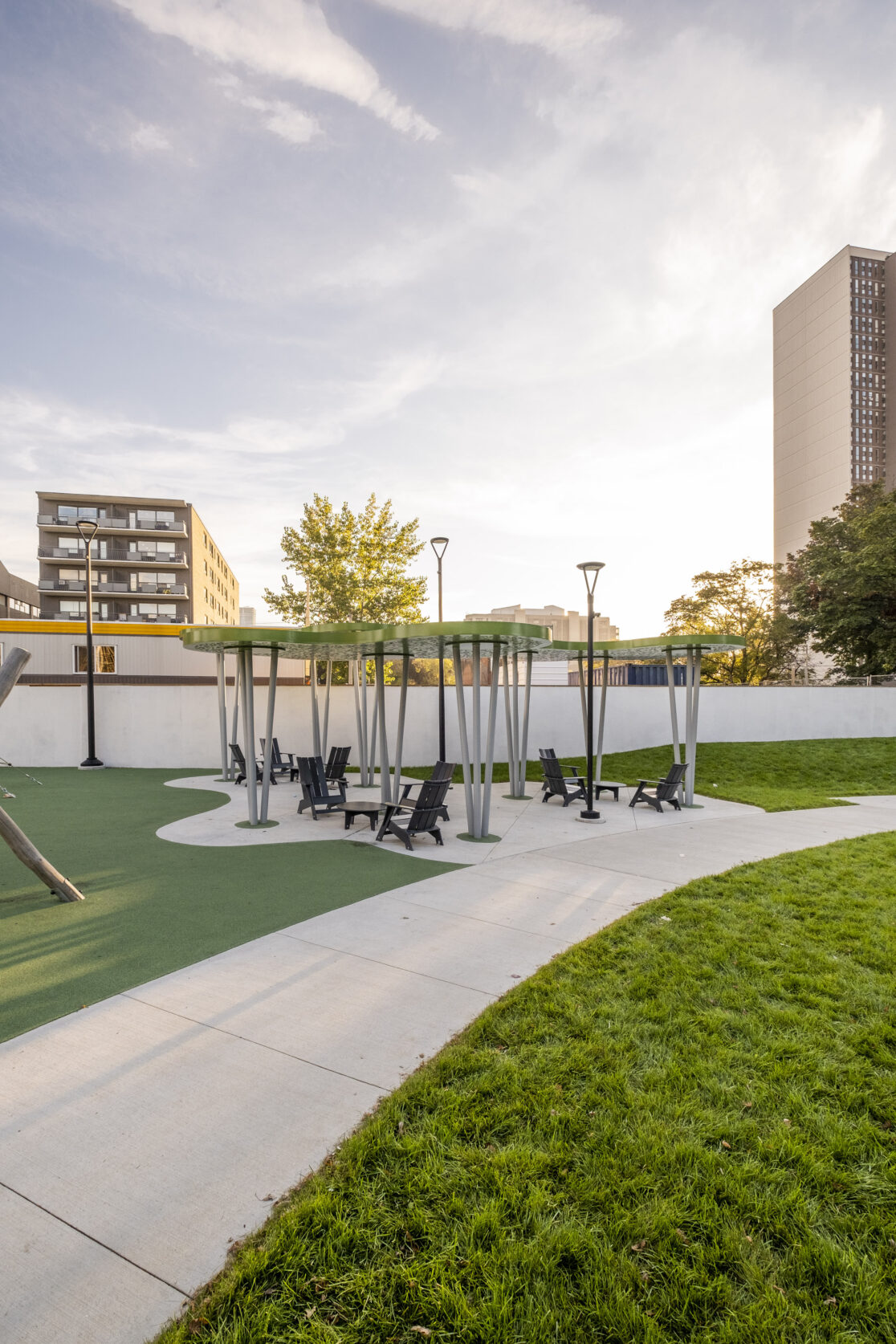 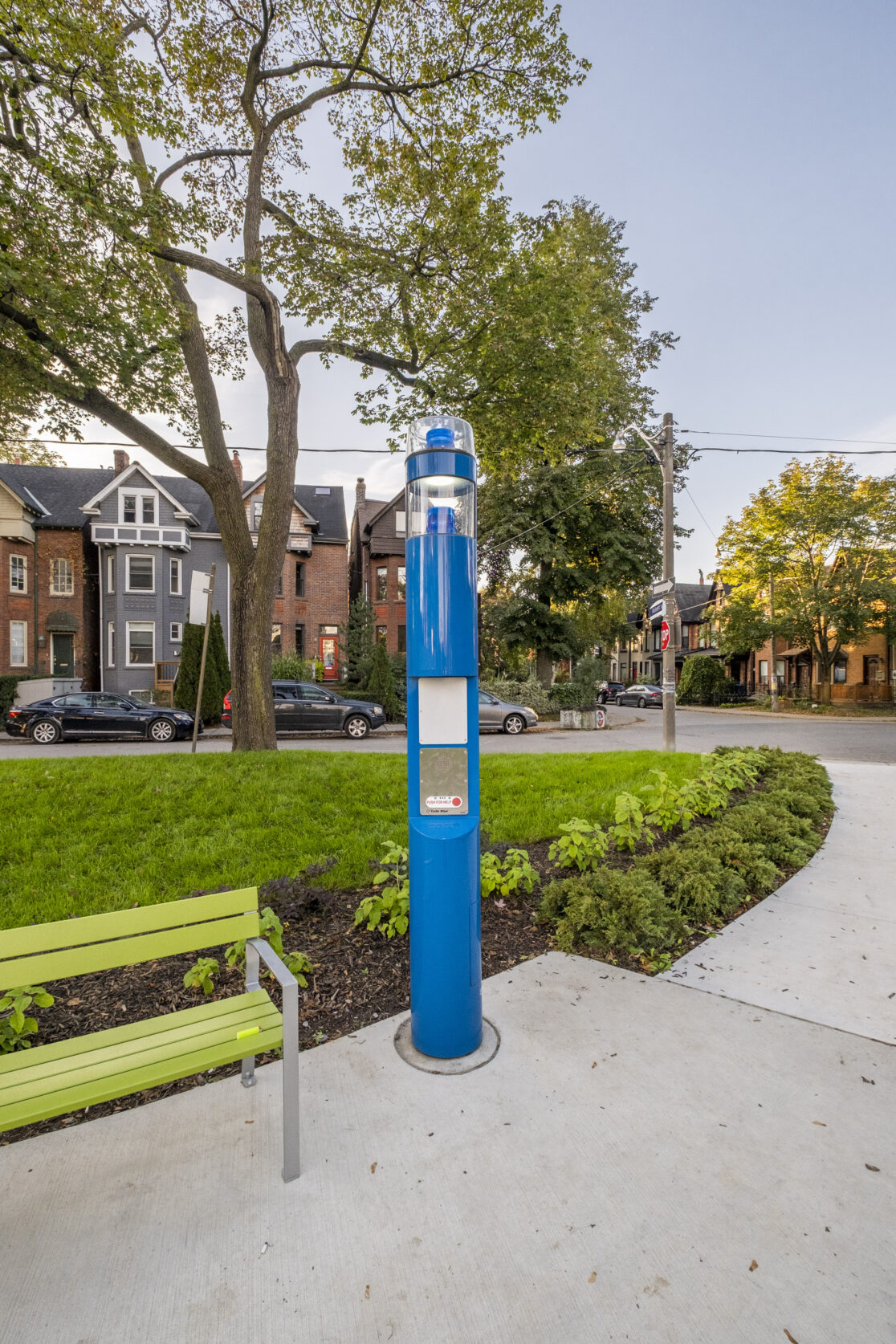 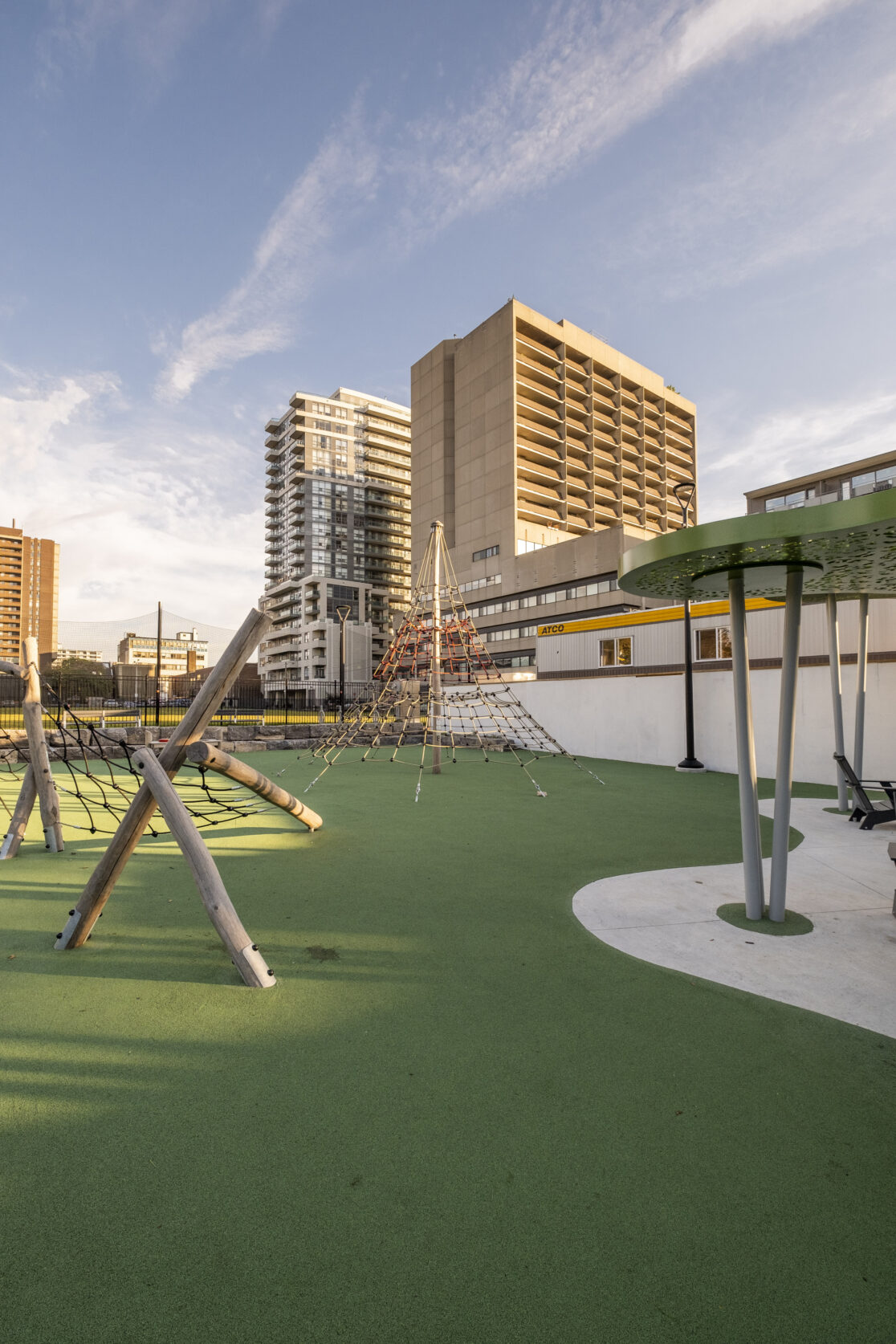 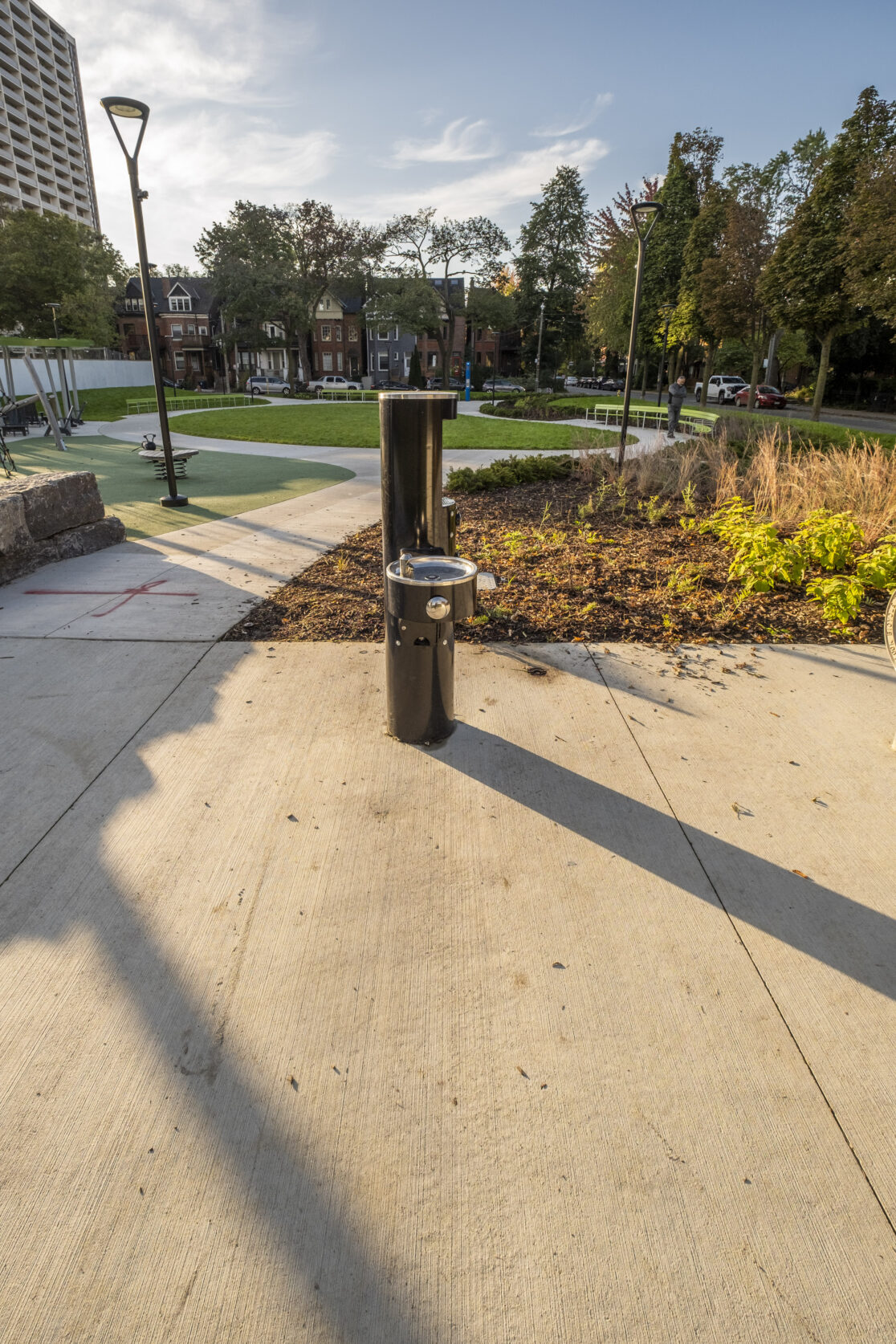 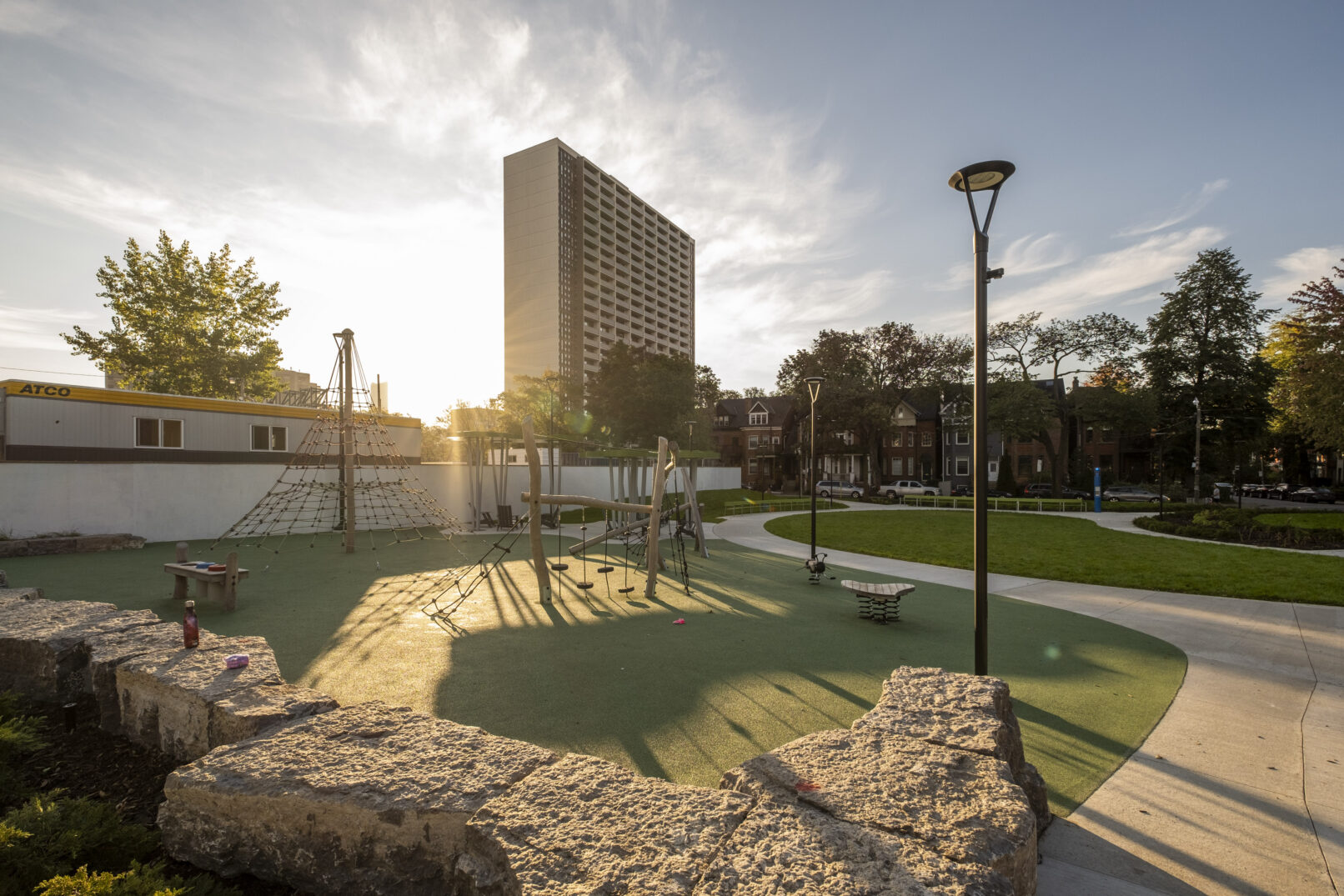 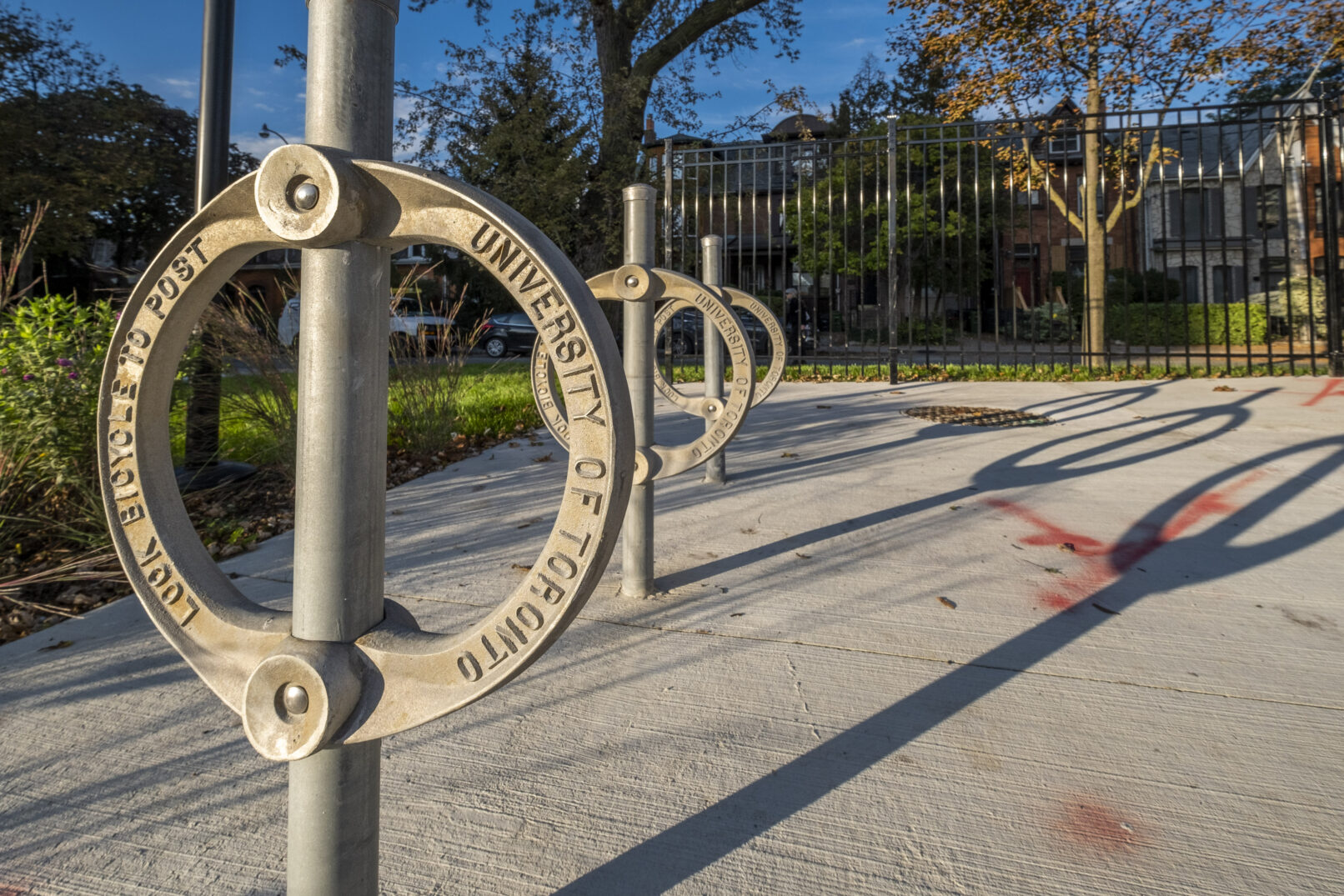 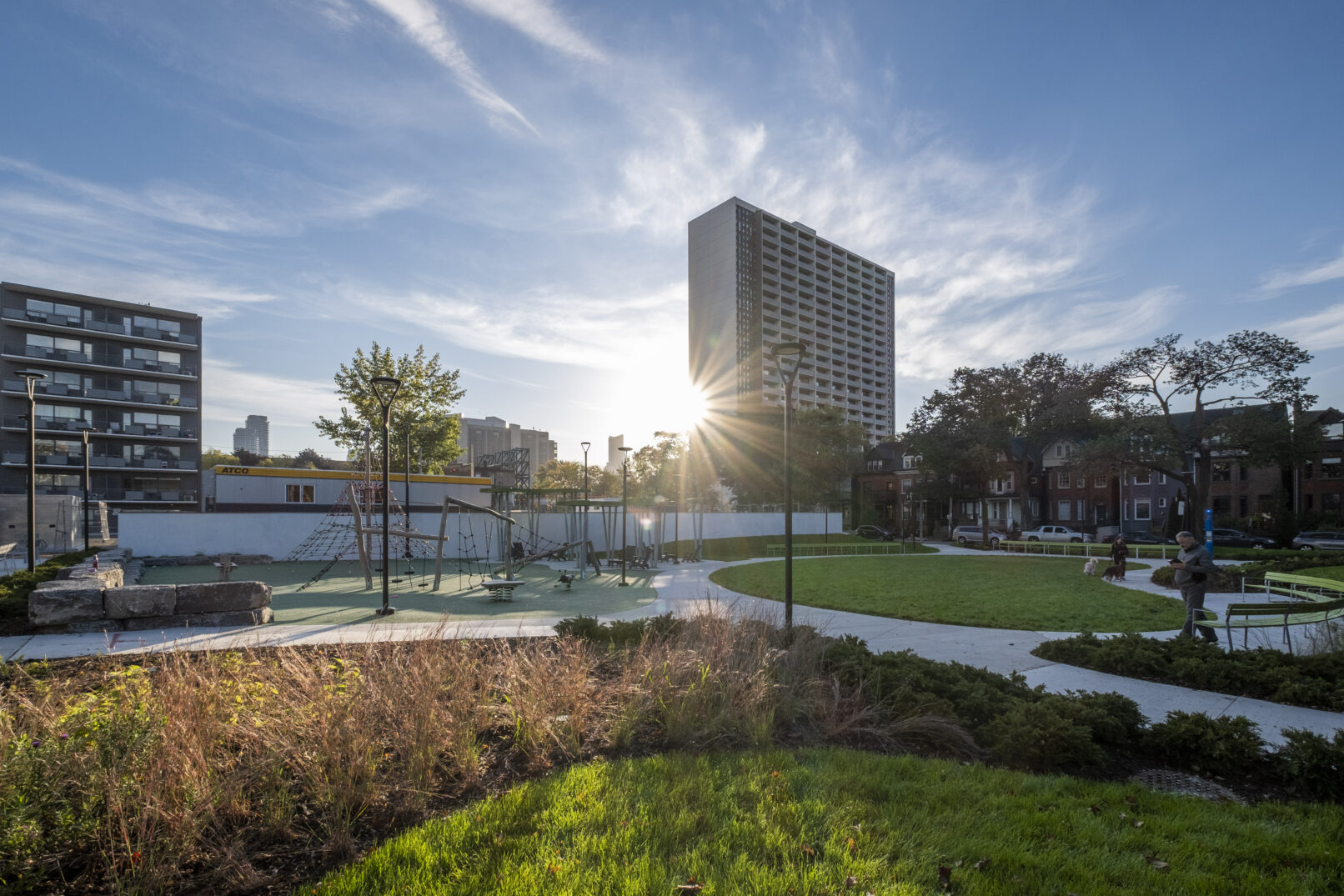